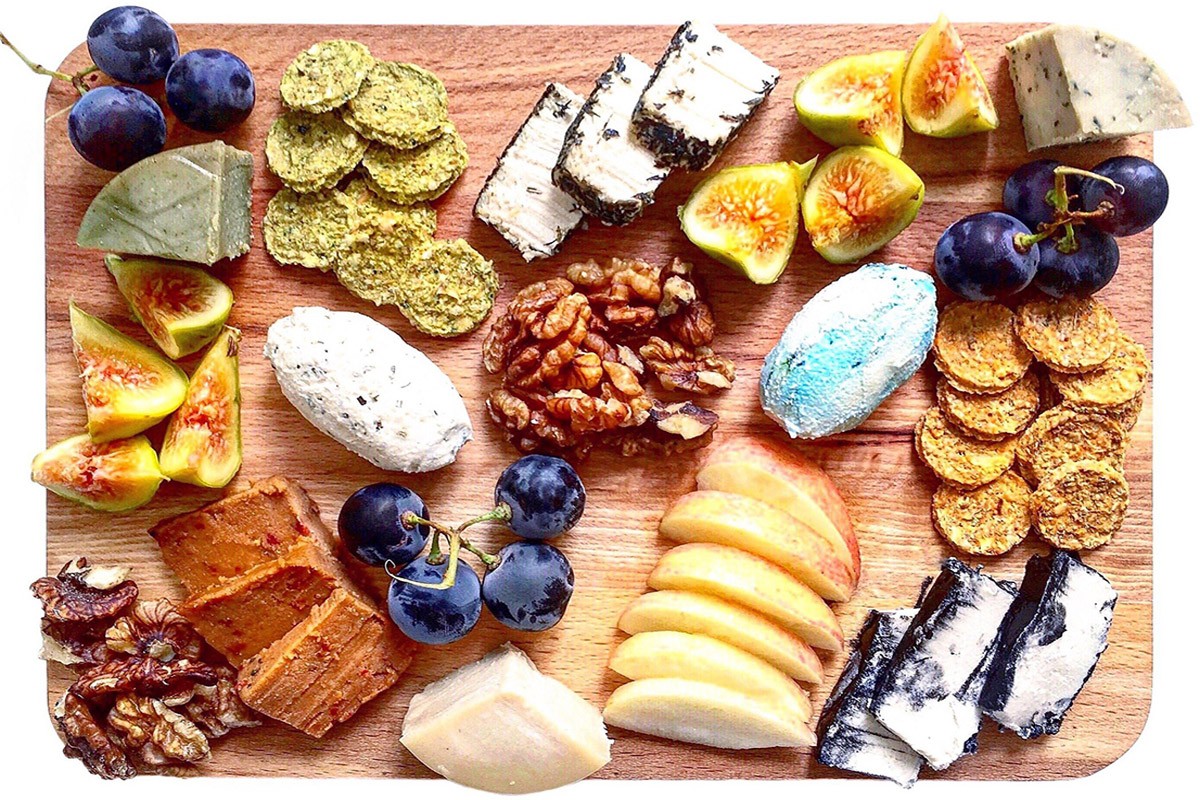 Wait, vegan what? This is usually the first thing you hear when you invite someone to taste your nicely set cheese board or when you excitedly tell stories about your first encounter with a heavenly vegan spread.

Vegan cheese is not as new as you’d expect, as it has been around since the 1980s. There’s even an entry on Wikipedia where you can find more about its history, from little known weird-looking-sticky experiment to the gorgeous gourmet experience of the 21st century.

I haven’t started eating it in the late 80s, when it was still in the early stages, and probably not as exciting as the hair gear and the shoulder pads of those days. But, like the steam engine, fast forward a few decades and here you have the Shinkansen.

A big part of its current popularity has to do with the main raw ingredients used in its production: nuts like cashew, pine nut, almond, and seeds like sesame and sunflower, then soybeans, coconut oil, nutritional yeast, tapioca, rice, and the list could go on. Sounds like a feast already, doesn’t it?

Unknown ingredients to the likes of us customers leave my taste buds unsatisfied, and make me think of crafts and arts, not food. But most of these unknowns are being ditched from the list of ingredients, so, predictably, the quality has improved

I got to try quite a few gourmet vegan cheese brands at the recent Vegfest UK. It was my only cheese tasting event and I realized that tastings are essential with new rather exotic products you don’t have easy access to and probably can’t afford to blindly buy just to see if you like them or chuck them.

I’m not gonna come up with a winner – I thought that all the gourmet cheese varieties I tried were off the charts. De gustibus non est disputandum, as they say. I’m quite new to this vegan cheese table too (almost everybody is. Well, except the core teams in grown-up vegan cheese companies, like Sheese, Follow Your Heart and Tofutti), and I just enjoy most of them. I do think it’s a great achievement when they use fewer ingredients to create complex taste, but the race is on and we’re in for one gourmet ride.

In no particular order:
Happy Cheeze (Germany)
Serotonina (Poland) had one of the busiest stalls with their quirky varieties, like the spicy horseradish and sweet beetroot Beatrude.
I Am Nut Ok (London)
New Roots (Switzerland)
Nutcraftery (Scotland) was not at Vegfest, as far as I remember, but this was my first encounter with gourmet vegan cheese and it was memorable. Hard to forget that cashew lightness on a cracker.

Where can I buy it from? Is it expensive?

In big cosmopolitan cities like London you can find some varieties of artisan vegan cheese in Whole Foods, Planet Organic, or local health/alternative stores full of tasty surprises – you know, the small, hidden ones that pack their shelves with unique products: the vegan, the gluten free, the vegetarian, the organic, the fair trade. And if they have space for a fridge, for sure there’s some gourmet cheese too.
In more mainstream supermarkets it’s less gourmet, more routine vegan cheese that’s cheaper in every sense of the word. However, as the market for such products grows, you’ll surely be able to find more varied vegan goodies in more places.

For those who don’t have access to stores focused on niche products, hopefully there is an internet connection nearby so you can buy them online. Most vegan cheese producers have a website where you can also buy the products, which says a lot about the kind of audience they attract. Unfortunately, it’s more expensive if you buy from another country, so you might want to keep an eye on local producers.

Money wise, this is not a can of mushy peas, so it won’t be the cheapest product on the market. When you realise nuts are the main ingredient, you’ll understand why. Like with most gourmet, artisan products out there, vegan cheese is no exception. This is more of a healthy delicacy you must consume mindfully and never ever let turn bad. Depending on what type of cheese you buy, prices range from 6 to 10+ pounds in UK. Offers and popularity matter too when it comes to the price tag. Mainstream vegan cheese in supermarkets can be as cheap as 2 pounds or less. But let’s keep talking gourmet.

I’m short of money, but sounds great. Can I make vegan cheese at home?

Sure you can, if you have the time and inclination to experiment. Like with most products, you can always try to recreate it in your own kitchen. The internet is full of recipes, tutorials, and photos that will make you drool. First of all, find some time, then get some nuts of your choice, and go for it. A blender might come in handy too. Here’s a good place to start. To make things easier, Ethical Shop is selling a The Big Vegan Cheese Making Kit containing everything you need to make 6 varieties of fresh delicious dairy free cheeses

On taste, phonetics and the future

I know I only scratched the surface here, so keep an eye on the ever-expanding world of plant-based cheese. And give it a try, even if you’re dedicated to dairy.

I’m not gonna go into the health benefits and that fact that it is an environmentally sound choice, something industrially produced dairy products fail to be. Mind you though, like with any foods, moderation is still advisable.

On a different note, I love the way cheese sounds, like you’re in for a hot melting encounter. Great word, but I honestly think they should find a different name for these vegan goodies. I heard people mocking it because it sounds like ‘fake cheese’, as in, “I’ll stick to the original, haha.” And no, I wouldn’t go for ‘Cheese replacer’ either. Maybe some vegan cheese was born out of the desire to please cheese eaters and convince them they can still enjoy a product without the infringement of animal rights and carbon footprint attached to it. But this is not a spare tire. I don’t care if it doesn’t melt and stretches like the dairy. For me it’s still a happy encounter every single time, and that’s something you don’t say too often in life, while staring in a fridge.

Note: No, tofu is not cheese, tofu is tofu. This is a product that’s been consumed in China and other Asian countries for more than 2000 years. The fact that some people try to replace cheese by consuming tofu is simply a personal decision.