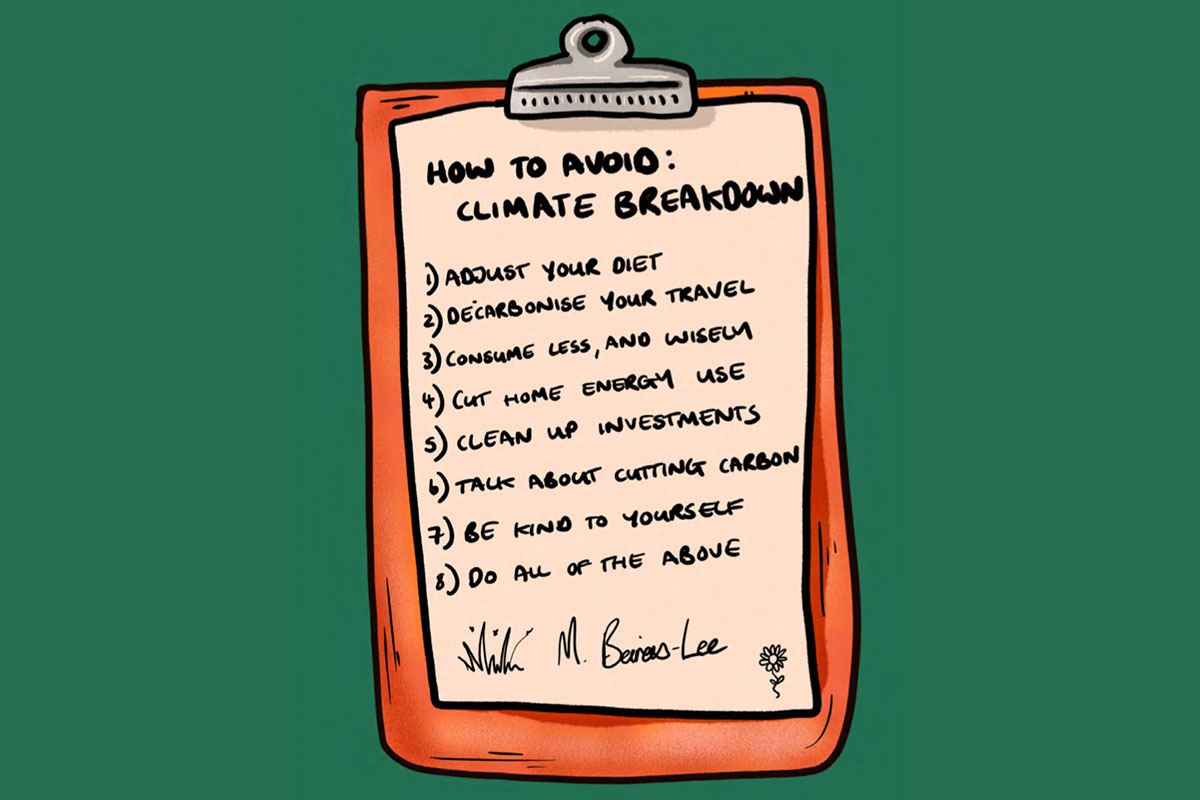 After any conversation about the climate crisis, most people ask (or should ask) “What can I do?”. According to climate scientist and communicator Katharine Hayhoe, if you’ve had a conversation like this, you’ve already done a lot. She thinks that the key to having a real discussion about the climate crisis is to connect over shared values and prompt people to realise that they already care about a changing climate: “We have to go out and look for the hope we need to inspire us to act—and that hope begins with a conversation, today.”

These What can I do? s come with many variations—some full of doubt or panic, some full of hope. Do we, as individuals, have any power to change the damaging status quo? What should governments do, and how can we influence them?

Happily, experts have long been asking themselves similar questions, and they’ve answered them not only through expansive academic studies, investigations and policy papers; they’ve also taken to the social media, newspapers, talks shows, and TED talks to voice their concerns and give informed tips on tackling the climate crisis.

The people we quote below are obviously not the only one experts worth listening to (that’s why we’re looking forward to hearing more from you and the experts you’re following!)

But, for anyone in need of quick answers to the biggest questions of today, this is a start.

In no particular order:

You might have seen Professor Maslin‏ in the BBC documentary: Climate Change: The Facts. His Twitter account is packed with graphs, studies, articles and solutions; in April, he listed the following actions individuals can take to reduce the impact of climate change:

He also shared a list of governmental actions to combat climate change:

Further reading: The Human Planet: How We Created The Anthropocene

In the May-June issue of the New Internationalist—entitled “How to Avoid Climate Breakdown”—Berners-Lee states that he doesn’t think lifestyle change should be a substitute for collective action. However, he says, personal carbon cutting matters because it’s a powerful way “to signal the climate emergency to those around us, move the needle on policy and set bigger cultural changes in motion.”

1. Adjust your diet
2. De-carbonise your travel
3. Consume less, and wisely
4. Cut home energy use
5. Clean up investments
6. Talk about cutting carbon
7. Be kind to yourself
8. Do all of the above

For more details on each step, check out the New Internationalist.

Further reading: There Is No Planet B: A Handbook for the Make or Break Years

In an article he penned for The Guardian, Packham kept the focus on pretty much everyone—farmers, citizens and politicians alike—and emphasised the importance of embracing change.

His musings were triggered by a UN report revealing that up to 1m species face extinction because of human actions. He makes an important point that “biodiversity loss cannot be partitioned from climate change, or from human population growth or pollution or plastics in our oceans,” as all these challenges are interconnected—and if we don’t connect the dots, the solutions will continue to emerge far too slowly.

1. Individual “lifestyle changes are always worth doing, but seldom as simple as they seem.” But it’s a process, and we can learn to eat more ethically not overnight, but in time. We just have to start somewhere. Packham—who famously became vegan after joining in with Veganuary earlier this year—admits that “it wasn’t too difficult to go vegan but that didn’t automatically mean I was eating ethically or in an environmentally friendly way: some of my vegan food was over-packaged and filled with palm oil.”

2. Protests can make a real difference to environmental debates in high circles. Not always, but it’s worth keeping the pressure up: “activism is going to become increasingly important to not only instigate change, but to speed it up.”

He agrees that there are no quick answers, but that it’s essential to take individual action in your daily life, to put into practice the things you can do now. If you find it hard to give up meat, start by eating better meat—but think about how much of it you’re eating. It’s OK to worry about the little stuff because it “adds up to the big stuff”.

1. Get political, write or talk to your MP
2. Write to companies you shop with
3. Leave companies and tell them why you leave them (it does get noticed!)
4. Boycott

Further listening & reading: In light of the Extinction Rebellion protests, David Powell answered questions from the public about what they can do as individuals to tackle environmental issues on Eddie Mair’s LBC show: What can individuals do to help the environment.

Noted climate scientist Kalmus agrees that “we need a massive climate mobilisation” and that “systems need to change, fast.” At the same time, he underlines the fact that individuals can do so much more than commonly believed. Via his Twitter account, his top six tips for individual action look like this:

For an in-depth study of individual action—a proper manual for systemic change, based on real life—do read his book, Being the Change.

During a TEDWomen talk (2018), the climate scientist explained why simple, practical, viable, accessible, attractive solutions (yes, like changing those light bulbs!) not only save us money, they also reduce our carbon footprint: “… there’s no silver bullet, as they say, but there’s plenty of silver buckshot.”

1. Eating local
2. Eating lower down the food chain
3. Reducing food waste (at the global scale, this is one of the most important things that we can do to fix this problem)
4. Reducing flying to a minimum
5. Talking about the climate crisis is essential. Talk about what’s already happening today around the world, but also what could happen in the future.

Further listening: Check out the above-mentioned TED talk “The most important thing you can do to fight  climate change: talk about it”

He reminds us that although climate change can seem like an overwhelming problem, “we are capable of extraordinary things when we try”. The author and activist worked on this short film about rapid transition, collecting inspiring actions undertaken in previous trying periods in human history.

Simms is part of the Rapid Transition Alliance. The name is self-explanatory, and it points to an important aspect of our predicament: time. What we do is important, but we have to also keep in mind that it needs to be an incredibly quick change, as time is indeed of the essence.

Further reading: On how we managed to solve food scarcity during the Second World War and fix the ozone layer a few decades later. Browse the RTA website for more inspiring stories of change, some quite recent, like the one about Taiwan’s transition from garbage island to recycling leader.

After the UK Parliament declared an “environment and #ClimateEmergency”, Monbiot tweeted that “Now we must act on it”. What did he mean by act?

1. No 3rd runway at Heathrow
2. No fracking
3. Leave fossils in the ground
4. Retiring fossil fuel based infrastructure
5. Encouraging a shift to a plant-based diet
6. An end to economic growth

Around the same time, a famous rant he made on Frankie Boyle’s show was widely shared online. You can see an excerpt here!

Further reading: Out of the Wreckage: A New Politics for an Age of Crisis

The infographic below—initially published two years ago in the journal Environmental Research Letters—is based on a study from Lund University, which found that “the incremental changes advocated by governments may represent a missed opportunity to reduce greenhouse gas emissions beneath the levels needed to prevent 2°C of climate warming.” In other words, “the most effective individual steps to tackle climate change aren’t being discussed.”

In the last few months this 2-year-old inforgraphic has had an online rediscovery:

According to this study, the four actions that most substantially decrease an individual’s carbon footprint are:

“We recognise these are deeply personal choices. But we can’t ignore the climate effect our lifestyle actually has. Personally, I’ve found it really positive to make many of these changes. It’s especially important for young people establishing lifelong patterns to be aware which choices have the biggest impact. We hope this information sparks discussion and empowers individuals” — Kimberly Nicholas (study co-author)

Read more about this study here.

Quick takeaways from other experts

Environmental writer Lloyd Alter wrote about the simple fact, easily overlooked, that bikes are climate action. And for those who didn’t know: walking is transportation (and climate action!).

On individual actions, climate scientist Michael Mann considers that “small behavioral change can lead us down a path of further action. It’s the beginning, not the end, of engagement on climate.”

Environmental writer and activist Bill McKibben considers that the two most important technologies to tackle climate breakdown and create systemic change are solar panels (and renewables in general) and non-violent civil disobedience.
Further reading: Falter: Has the Human Game Begun to Play Itself Out?

These are just a few of many suggestions, but, as you can see, individual action is important, and putting pressure on governments and other decision makers to do their job is equally important, as it can speed up the transition to a low carbon world.

Vote for leaders that believe in science and take the climate crisis seriously. Protest. Join a grassroots organisation or a community group that works towards a sustainable world. Use fewer fossil fuels. You can also follow a climate scientist to keep you up to date on science, the climate crisis and more useful tips for system change. Remember that everything counts and that to change everything, we do need everyone.

Note: We’ll keep updating this list over the coming months. Feel free to add your suggestions in the comments!