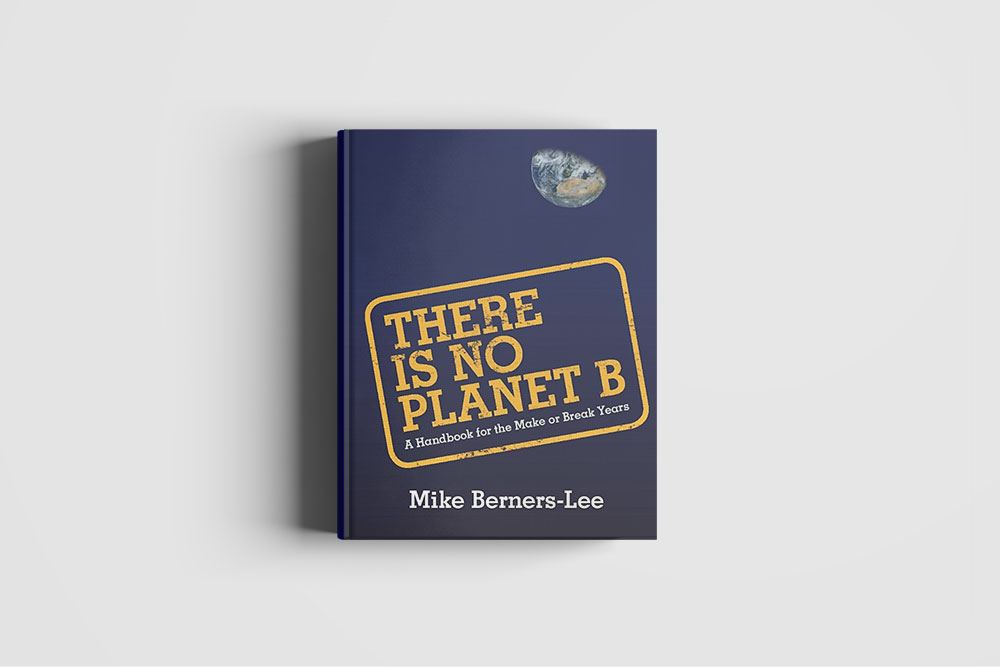 The summer of 2019 has brought a blistering heatwave of record-breaking temperatures to Europe—and we should get used to it. By 2050, it’s been reported, London’s weather could be similar to that of Barcelona. Taking in these increasingly terrifying predictions about the future of the climate can lead to anxiety, or even worse—paralysis. But what we need right now is for people to act; and that means the majority of people. But what, exactly, are we supposed to do?

There Is No Planet B: A Handbook for the Make or Break Years isn’t the first book on climate action, but the author, Mike Berners-Lee, goes a lot further than others have dared: he states that only a complete overhaul of our global values system will ensure that the actions we’re taking to prevent climate breakdown will be effective.

Mike Berners-Lee isn’t just famous for his last name (his brother, Tim Berners-Lee, invented the web), but also for being a distinguished researcher of greenhouse gasses. He’s a fellow and professor at Lancaster University, and founded a consultancy which advises companies on reducing their carbon footprints. He’s also authored other climate-related books, among which are How Bad Are Bananas? and The Burning Question.

The book’s title hints at the techno-optimists, like Elon Musk, who dream of colonising other planets so the human race can survive if the Earth doesn’t. But Berners-Lee dismisses the dreamers: what he cares most about is saving Planet A.

The book is organised as a set of 130+ questions and answers, grouped under categories like Food, Energy, and Travel and Transport. The intention of this structure is to keep things clear for anyone who’s reading to see how they can make changes in their daily lives—but Berners-Lee also writes with an eye to collective actions we can take, as well as what governments and businesses should be doing.

The questions range from the very simple, like “should I go vegetarian, or vegan?” (it’ll help, but it’s only a tiny piece of the puzzle) and “should I fly?” (only if you really have to) to the highly complex: “can the free market deal with the challenges of the Anthropocene?” (it can’t, but neither can any other ideology on its own). There are also questions for farmers, supermarkets and other larger operators in our human ecosystem, aimed at determining the utility of antibiotics for animals, or why renewable energy hasn’t supplanted fossil fuels yet.

Businesses are a particular focus of attention for Berners-Lee, as their whole rationale for existing will have to shift significantly; and with it, our cultural mentality that everything is for consumption, or that more is always better:

“Businesses need a vision for the world they are pushing for, and a coherent plan for how they help to bring that about. They need a systemic understanding of the full range of both their direct and their indirect impacts. By now, the next sentence may be too obvious to be worth writing, but just to be clear: In the twenty-first century it is totally unhelpful to have organisations that exist primarily in order to make profit.”

In answering these questions, Berners-Lee builds his thesis incrementally, chapter by chapter, to the point where we’re forced to ask ourselves: Have we created the kind of civilisation in which our fetish for consumption isn’t only badly impacting our planet, but also ourselves? Who is in charge of how we envision and reconstruct the future? Where is our own place in this equation?

There’s one paragraph in particular that for most 21st-century city dwellers reads like a utopia from which we’re very far removed, beyond the grasp of our imagination:

“The air is fresher. Life is healthier, longer, more relaxed, more fun and more exciting. Our diets are varied, tasty and healthy. More of us get out as much as we want to, both socially and physically. Travel is easier – but we spend less time in transit. We feel freer to live in whatever way seems meaningful to each of us at the time, in negotiation with other people’s equal right to do likewise. There is less violence everywhere. Cities are vibrant whilst the countryside teems with wildlife. Our jobs are more interesting, and the pressures are more often self-imposed. We expect, insist on and get higher standards of trust and truth, in politics, in the media and in fact everywhere. We are better connected to the people around us and to our sense of the global community. We give more of our time and attention to others and we notice and enjoy more of what is going on around us. We might compete with each other for fun but where it really matters we collaborate better than ever before.”

Berners-Lee believes the key to unlocking this utopian dream is an appraisal of our attitudes towards resources (man-made or natural), and towards other beings—human and animal equally.

The denizens of the Anthropocene need to start working on a cure to this age’s illness. Many older environmental activists, like David Attenborough or Jane Goodall, care passionately about a future they know they won’t live to experience. That’s the kind of attitude Berners-Lee wants people to unite around—and maybe, if we’re lucky, the changes we make today could have positive consequences within our own lifetimes too. We may yet live to see the utopia Berners-Lee envisions.

His proposition is simple: if we’re really going to save the planet for future generations, what will motivate us is a change of mindset, a shifting of balance towards intrinsic values:

“There is a stack of research to show that people and societies that are more governed by intrinsic values and motivations end up being happier and healthier and treating the planet kindlier than those that are more governed by extrinsic values and motivations. Intrinsic values are associated with higher levels of personal wellbeing, lower levels of distress, depression and anxiety, acting in pro-social ways, sharing more, higher empathy, being less manipulative, and more positive ecological attitudes and behaviours.”

He’s not alone to insist that climate action must be viewed as a multi-disciplinary challenge; the argument finds strong support in younger activists too, who see climate change as deeply rooted in larger systemic issues, like colonialism and patriarchy. They know that the only solutions to climate breakdown are holistic: in addition to stopping fossil fuels and reducing waste, we must also demand from our leaders fairer systems, where social justice prevails, and previous mechanism of oppression are abandoned..

Yet recent months have seen fresh resistance to global efforts to reduce atmospheric CO2 levels; most recently, several central European countries—Poland, the Czech Republic, Hungary and Estonia—blocked an EU initiative stipulating that member states become fully carbon neutral by 2050. Local political factions are attempting to claim a cynical voice in climate debates in order to advance their own ethno-nationalist agendas. As omens of increasingly temperatures continue to hit headlines, along with predictions of increases in climate migration, we can expect European far-right parties to find new excuses to solidify their position on closed borders.

Berners-Lee diplomatically avoids politicising the content of the book; instead, he provides a science-based list entitled “What are the fourteen things that every politician needs to know about climate change?” Here, he stops short of exploring the inevitable economic and societal repercussions of climate change. Instead, he offers an optimistic list of skills for the future, which we can use to hold ourselves, our politicians and the businesses who cater to us accountable: we’ll need big picture perspective to achieve a global empathy; we’ll also need critical thinking and self-reflection to appreciate the simple and local.

Throughout the book, Berners-Lee employs a less alarmist tone than he probably could, being so aware of the scale of the problem and the size of our task to fix it; it seems to me that his intention is instead to empower his readers through positive and tangible examples of what they can start doing right now. By way of conclusion, he provides a tongue-in-cheek glossary of terms:

Potentially a game changer, with the potential to take carbon out of ambient air, either using land and plants or through “synthetic trees”. We could really do with it, but at  the moment it is still an expensive emerging technology. Will big R&D investment lead to a rapid solution? Will it be like building the bomb or more like curing cancer? We should find out.

A way of spending time that can be useful, fulfilling and which can be a mechanism for appropriate wealth distribution. Worth having when at least two of these three criteria are met, but otherwise not. Therefore to be used with caution as a national performance metric.

Along with coal and gas, one of the three substances that we need to leave in the ground. Its energy density and fluidity make it the easy choice for powering cars, ships, and perhaps, most critically, planes. But its time has to end fast.

Berners-Lee advances the idea that the Anthropocene is, rather than just a period of time, a multi-faceted problem, with implications beyond the rising temperatures on planet Earth. He hopes that in the process of saving our planet from climate disaster, we could also learn how to leave better, more fulfilled lives. Doubt it? Well, in his words: “we should find out.”