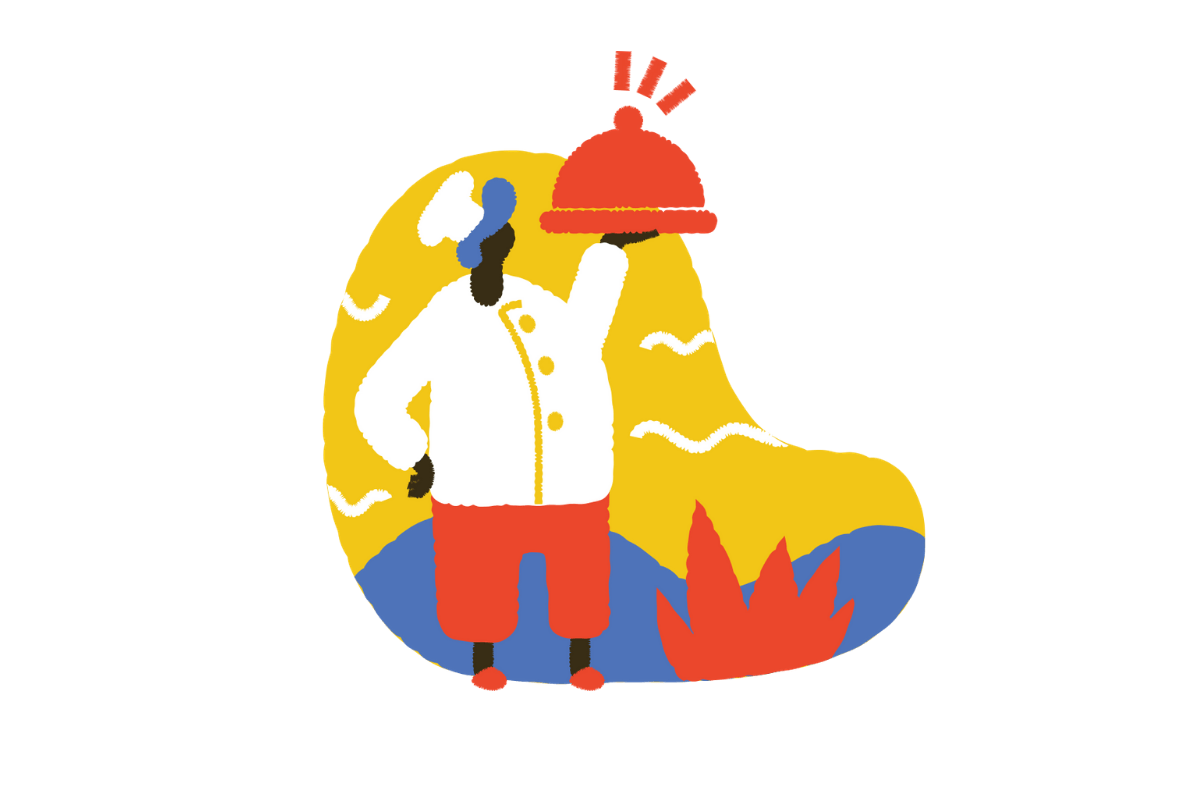 If you live in a developed country, it can seem churlish to complain about the global food system of farmers, suppliers and retailers that makes sure our supermarket shelves are always fully stocked. But as grateful as we should be for food security and variety that our ancestors—and the 820 million people in the world who don’t have enough to eat—could only dream of, it’s a fact that the current food system is an active threat to the planet, as food production is the primary cause of global environmental change.

That’s because food production is responsible for up to 30% of global greenhouse gas emissions—it’s a prime source of methane and nitrous oxide, which have 56 and 280 times the global warming potential of CO2 respectively. But aside from driving the breakdown of the climate, food production has other devastating effects on the planet:

🍲 It’s also a major polluter of water, causing eutrophication in lakes and coasts

The UN has said that in order to limit warming to 1.5C, we need to see a transformation of the world’s food and land systems for which “there is no documented historical precedent” within the next 11 years maximum. Change isn’t just urgently needed, it’s on its way—with some form of meat tax looking increasingly inevitable. Here’s how you can do your bit, and prepare for the dietary shifts that will have to take place, with what you eat day to day.

What you should be eating less of

You already knew that beef is terrible for the environment, because of the methane that cows produce and the deforestation caused to create pasture for them. But did you know that dairy also has a huge environmental impact—with some cheeses having a bigger carbon footprint than pork?

However, there is a carbon hierarchy within dairy. Cheese has a bigger footprint than milk (as it takes around ten kilograms of milk to make one kilogram of cheese), and some cheeses are worse than others. As a rule of thumb, hard cheeses (like parmesan) tend to be worse than softer cheeses like cream cheese, mozzarella and camembert: because not only do they require more milk to make, but they also have a more energy-intensive aging process. And, generally, sheep cheese is worse than cow or goat, as sheep emit twice the amount of methane per unit of milk produced.

All this is to say that being vegetarian isn’t really much better for the environment than being a meat eater—especially if you’re a vegetarian who eats a lot of cheese. As painful as it may be for cheese lovers, a vegan diet is best for the planet by quite some way: in fact, it’s the “single biggest way” to reduce your impact on earth.

👉 Of the variety of vegan milks on the market, studies show that in terms of land use, water use and overall emissions, soy and oat-based are the best choices.

There’s also a carbon hierarchy within meat. Beef has the biggest impact, for the reasons already mentioned. After that, it’s:

You might think that pigs, being generally bigger and uglier than sheep, have a bigger carbon footprint, but it’s actually lamb in at number two; that’s because sheep, like cows, are ruminants, and the bacteria in their stomachs that help them digest grass produce methane. Chickens are the least impactful, because, to put it bluntly, they’ve been bred not to live very long.

The ethical and environmental arguments against eating industrially-farmed meat are strong, but, if you’re a die-hard carnivore, see if you can replace some of your beef and lamb consumption with poultry and pork, go weekday vegetarian or join in with Veganuary. Because although going fully vegan is undeniably better for the planet, climate action isn’t a zero sum game: every little really does help.

👉 What about organic meat? In the UK, “organic” means that food was grown without synthetic fertilisers, pesticides or additives, and animals weren’t treated with antibiotics. Although the lack of chemicals means organic farming causes less pollution of waterways, it doesn’t always produce less greenhouse gas emissions—they vary from place to place, and can sometimes even produce more emissions than a traditional farm, as organic farming requires more land.

This is a complicated one.

Wild fish have a relatively small carbon footprint, their main source of emissions being the fuel burnt by the boats that pull them in. Smaller fish (like anchovy, herring or sardines) and whitefish (like pollock, cod and haddock) are generally the best choice, carbonwise.

But—and it’s a big but—the great majority of the world’s fish stocks are currently fully or over-exploited, and huge ships that use giant nets (bottom trawling) or thousands of hooks (longlining) to catch fish also wipe out hundreds and thousands of whales, dolphins, porpoises, sharks and turtles each year, threatening whole marine ecosystems. Overfishing isn’t just a problem on the high seas: in March, mackerel lost its eco-friendly certification in the UK due to overfishing.

You can check the sustainability rating of specific fish at the Marine Conservation Society’s Good Fish Guide. Fish that have a relatively low carbon footprint can at the same time be a poor choice sustainabilitywise: for example, Peruvian anchovies, although low-carbon, are at a low population due to the last El Nino event.

👉 What about farmed fish? 50% of the fish eaten in the world come from aquaculture, and with the ongoing over-exploitation of wild fish stocks, that number is only likely to increase. It is possible for aquaculture to be done in a relatively climate-friendly way—but unsustainable, rapid development in this area is causing social displacement, devastating deforestation, and driving further overfishing for fish feed.

❌ Avoid: Crustaceans of all kinds (shrimp, prawns, lobster). Crustaceans (even farmed crustaceans) have a higher impact than pork—sometimes even beef!. Wild crustaceans are particularly carbon intensive to catch, because pulling them in requires more fuel for fishing boats.

✔️ The best option: Mollusks (such as clams scallops, oysters and mussels). Mollusks have one of the best protein/carbon ratios around, farmed or wild; in fact, cultivating mollusks can even have a positive impact, as they absorb excess nutrients in the water that are harmful to other ecosystems. The New York Times has a bunch of mollusk-based recipes here!

What you should be eating more of

Whole grains (like rice, wheat and corn), fruit and vegetables all have low environmental effects per serving. Although “food miles” aren’t a great measure of a product’s environmental impact (transport actually accounts for just 6% of a food’s footprint) it certainly doesn’t hurt to try and buy local and seasonal produce that hasn’t been flown in to the country or grown in an energy-intensive greenhouse. This chart shows what’s in season in the UK when.

As for nuts and legumes (like beans, lentils, peas and soy): these protein-rich foods are what you should be replacing the meat in your diet with. They’re by no means perfect substitutes, from an environmental point of view: soy farming can also cause deforestation and pollution, and some nuts (particularly almonds, pistachios and walnuts) require a huge amount of water to grow. However, nuts and legumes are still far better for the environment than meat of any kind.

Putting it all together: “The Planetary Health Diet”

It’s one thing to know you should be eating less meat and more fruit and vegetables. But what exactly does this look like, on a day-to-day basis?

The EAT-Lancet commission—a collaboration between the Lancet medical journal and nonprofit startup EAT—brought scientists and experts from multiple disciplines together to create a diet that could sustainably and healthily feed the 10 billion people there’ll be on Earth by 2050. The diet isn’t strictly vegan: its earmarks are a diversity of plant-based foods, with limited amounts of animal foods, unsaturated fats and added sugars.

The recommended percentage caloric intake per day is as follows:

(Note that although added fats, for example, have the second highest caloric allowance, it doesn’t mean you should be gorging on them—rather, that the small amount that’s allowed per day provides a lot of calories!)

If those percentages alone don’t mean much to you, EAT have put together a weekly shopping list, as well as a bunch of planetary health recipes.

🗑️ One final note: even if you go fully vegan, you can’t eat a planet-friendly diet without reducing your food waste. Globally, a third of the food produced each year is lost or wasted; in industrialised countries 40% of these losses happen in shops or at home. Not only is this a tragic and unjust waste of resources, but wasted food generates 8% of annual greenhouse gas emissions: which means if it were a country, it would be the third largest polluter after China and the US.

There are plenty of little things you can do to play your part, from proper meal planning and better food preparation techniques to learning more about food labelling and using leftovers. The Love Food Hate Waste site has plenty of ideas and recipes to get you started.

Although it’s always important to try and be the change you want to see, individual dietary shifts aren’t enough on their own—to stop “severe, pervasive and irreversible” climate change, we need to see a transformation of the global food system.

But this transformation will come from policy, and policy comes from the politicians whose jobs depend upon us. So share as much information on planet-friendly food as you can—there’s so much misinformation out there, you can bet that many of your friends and family won’t know how polluting lamb is, or will think that being vegetarian puts them in the clear. The important thing isn’t to become a strict vegan overnight—but to try, to care, and to try and get others to care too.

EAT: Nonprofit startup advocating for a transformation of the global food system

Marine Conservation Society: Working to make sure the UK’s seas are healthy and protected