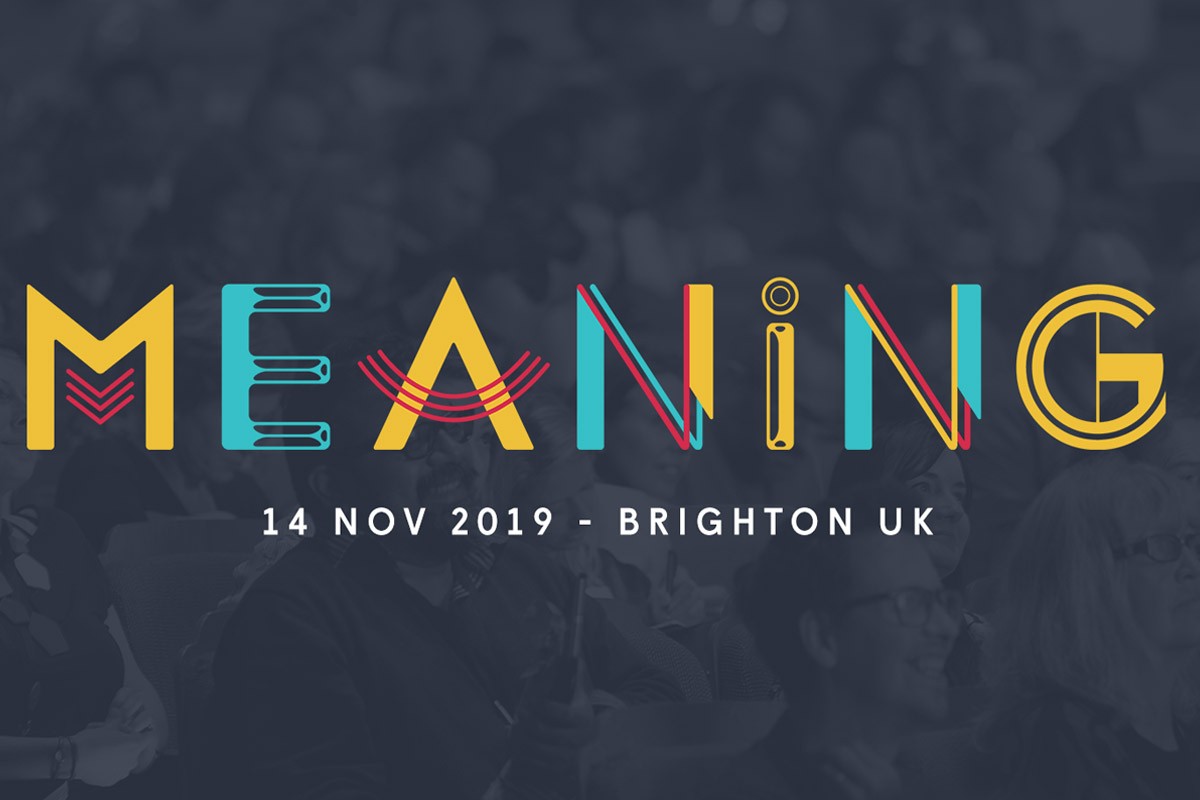 Meaning – the annual gathering for progressive business – returns to Brighton’s Dome on 14 November. Now in its eighth year, the conference has a packed agenda that will bring  inspiration and fellowship to the growing body of people who believe the world of business  should have a positive impact in our world.

The particular challenges of our time form a significant part of this year’s Meaning  programme. Speakers and workshops will take on themes like 👉 the role of business in climate breakdown and 👉 new ways to structure and organise our workplaces and working lives.

Hosting Meaning 2019 will be ​Nilofer Merchant​ – widely acknowledged as one of the  business world’s brightest leaders. Nilofer will bring her own concept of ‘Onlyness’ to  Meaning – a message of recognising the unique role each of us can identify and embrace in  our working lives.

Also appearing at Meaning will be renowned journalist and commentator ​Paul Mason​,  Extinction Rebellion co-founder ​Clare Farrel​l, New Economics Foundation CEO ​Miatta  Fahnbulleh​, and ​Brett Hennig​, who advocates for the use of citizens’ assemblies.  Business investor ​Armin Steuernagel​ will make the case for ‘steward ownership’ of  businesses, whilst ​Jennifer Brandel​ will describe a whole new approach to audience-led  journalism. ​Sarah McKinley​ will also explain ‘The Cleveland Model’ for community wealth building. World Fair Trade Organization CEO ​Erinch Sahan​ will share his passion for global trade justice, and ​Maff Potts​, will tell us the story of how the ‘Camerados’ movement was born.

Supporting the main conference will be a choice of hands-on ​workshop sessions​ and  community-organised ‘​Meaning Fringe​’ events to create a rich experience that attracts  attendees from across Europe and beyond.

“Meaning has become a key annual date  for people who care about our world and society to get together and look at how business can  play a positive role. For me, this year’s speakers bring out the role of people power in tackling  the huge inequalities that exist. We live in challenging times, but the positivity of Meaning is  something very special.”

Meaning began in 2012 as a way of bringing together a forward-thinking business  community and continues to grow year by year under the inspired leadership of Louise Ash.  It’s a one day event with a single track of talks complemented by three tracks of workshops and breakout discussions and an excellent lunch.

In addition to the core conference 23 independently organised Fringe events will take place  during the course of the week, ranging from a guided sea swim, to social meet-ups to in depth leadership workshops.

📣 More about the speakers:

Meaning 2019 host Nilofer Merchant is a champion for the untapped potential lying wasted in organisations around the world. She believes passionately in the power each and every one of us has to help solve the challenges of our time.

Clare is an activist and campaigner devoting her creativity, her energy, and occasionally her personal liberty, to fight climate collapse. As a co-founder of Extinction Rebellion she is at the strategic heart of a mass movement of people using non-violent direct action in the firm belief that these are a proven way to create rapid change.

Journalist, film-maker and author Paul Mason returns to Meaning to help everyone explore what it means to be human in an age of algorithms and markets. He will offer a vision of  humans as more than puppets, customers or cogs in a machine. This will be an optimistic call to arms for the restoration of our collective humanity.

Armin is an investor on a mission: a mission to help companies protect themselves from the clutches of vulture capital. At Meaning he’ll introduce the audience to the concept of steward ownership as a way to nurture a business’s growth without risking the integrity of its founding purpose.

As chief executive of the New Economics Foundation, Miatta leads an organisation that is at the cutting edge of thinking on progressive economics and social policy. At Meaning she’ll help the audience understand how a Green New Deal can work in practice to create a more equitable and sustainable economy for all.

Maff Potts believes the key to a happier and healthier society is friendship. That’s why he  founded the Association of Camerados. And he’s coming to Meaning to invite everyone to join in.

In an ever-changing world, journalism as we know it is struggling to survive. At Meaning,  entrepreneur and journalist Jennifer Brandel makes a compelling case for a new approach to media creativity using an innovative model for audience-first journalism.

Sarah McKinley is part of the pioneering team that helped design ‘The Cleveland Model’ – a simple but radically transformative way for co-operative businesses to operate in  partnership with public institutions as part of a healthy, resilient localised economy.

As chief executive of WFTO, Erinch will bring to Meaning his passion and advocacy for fair trade – not just as a certification for products but as a way of operating in business that supports communities, enables sustainability and creates prosperity.

With our faith in politics at an all-time low, is it time to reinvent the way we interpret  democratic ideals? Brett Hennig explains how the practice of sortition – once favoured by  the ancient Greeks and now demanded by the Extinction Rebellion movement – could revive the practice of government, by asking ordinary people, randomly selected, to make decisions on behalf of society. 💡

The 2019 conference is set to be Meaning’s biggest yet.
Don’t miss this opportunity to meet your tribe!

Get your tickets 👉 here.