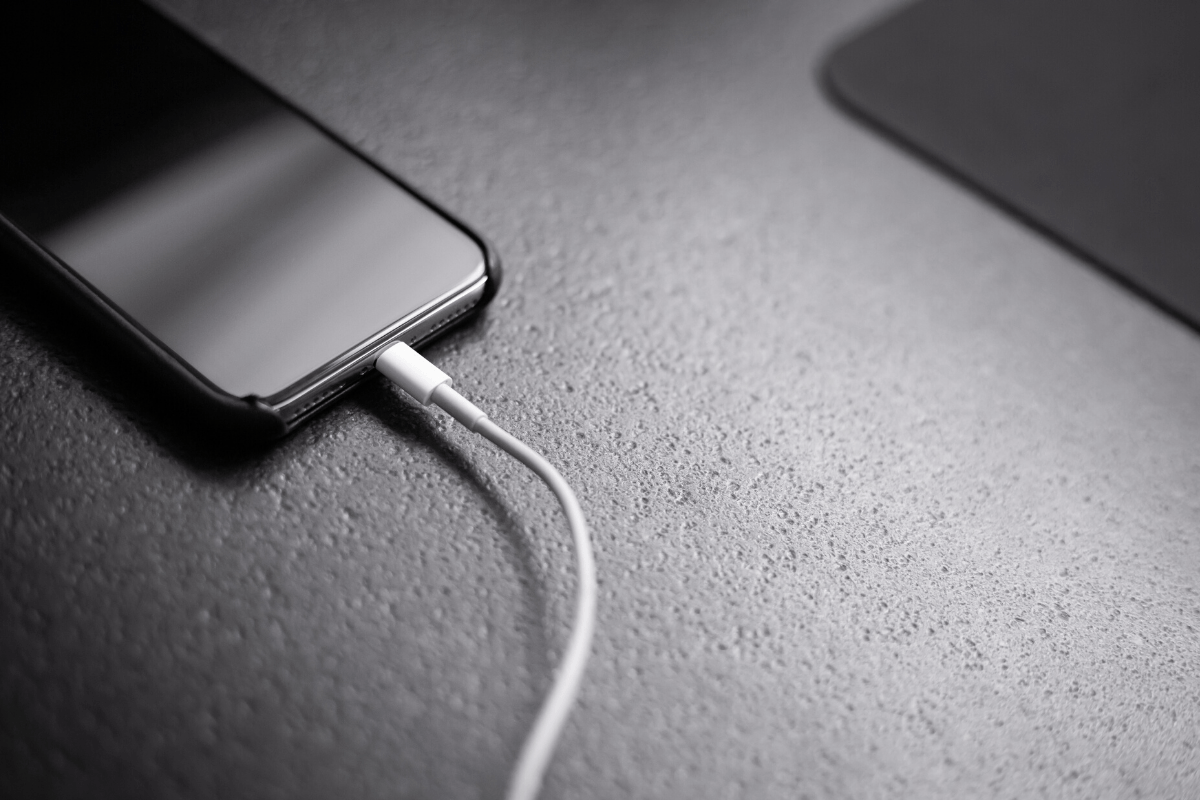 When I look at my phone I think about slavery. I think about modern-day slavery, perpetuated by the wealth and power that historic slavery facilitated. I think about how invisible it is, despite modern-day access to information and education. And despite the many examples of injustice exposed thanks to tech. Here’s the thing: slaves don’t have access to a school system that can teach or empower them to speak up. Slaves don’t own smartphones. Slaves are just one part of how smartphones came to exist.

Frédéric was nine years old when he quit school and started working in the cobalt mines of the Democratic Republic of Congo (DRC). His family could not afford the monthly school fee of six USD per month. In 2016, when he was 15 years old, he worked as a transporter and carried heavy sacks filled with cobalt-rich stones down a steep mountain. He could do seven round trips on the 700-metre stretch every day, receiving a daily wage of less than a dollar. At one point, when descending, he fell five metres into a tunnel, fracturing his spine. He became paralysed from the chest down.

This boy’s name is really something else, and his fate in the mines is one of many described in a lawsuit filed in Washington DC in December 2019. The lawsuit was filed by International Rights Advocates, representing 14 parents and children from the Democratic Republic of Congo. Tech companies Apple, Google, Microsoft, Dell, and Tesla are accused of understanding the working conditions in the country’s mines and of willingly allowing the exploitation of children, as well as the dangerous working conditions that lead to hundreds of deaths every year, as well as many more serious accidents.

Every smartphone, tablet, and electric vehicle – and any other device with a rechargeable lithium battery – needs cobalt to charge. And more than 60 percent of the world’s cobalt is from the DRC. It is highly likely that one or more of your “smart” devices contains cobalt from the second-largest country in Africa, the home to more than 100 million people. It will also contain tin for soldering, tantal to store electricity in capacitors, and tungsten – the mineral that helps your phone vibrate.

“The Democratic Republic of Congo is potentially one of the richest countries on earth, but colonialism, slavery and corruption have turned it into one of the poorest.” — Dan Snow

To understand the circumstances of the Congolese we need to back up a few hundred years. The DRC was a hotbed for slavery and it is estimated that during the 16th to 19th centuries several million people were abducted near and around the Congo basin – the world’s second largest rainforest, which encompasses a broad belt along the Congo River.

When slavery became illegal there were not many years of respite. In 1870, King Leopold II of Belgium occupied the Congo delta and forced the population into slavery within their own country, to extract the natural resources ivory and rubber. Villages who would not give way were destroyed and workers who protested were punished with amputation or execution.

And when they finally reached independence from Belgium in 1959, the Congolese would endure one of the most corrupt leaders, and later be stricken by conflict and waves of refugees from neighboring Rwanda. This was the aftermath of what is called “Africa’s first world war” – a war that extinguished six million human lives.

The exploitation of the impoverished and powerless Congolese and their natural resources continues into the 21st century, as tech companies have a substantial need for cobalt in order for their products to live on. All so that you and I can carry internet in our pockets. The human rights group Free the Slaves tells us of continued slavery within the mining industry of the eastern DRC.

The ongoing lawsuit highlights how tech companies are aware of the wrongs addressed by the human rights programmes that the companies finance. These programmes often focus on whistleblower mechanisms, helping people “anonymously report irregularities in their local language so that accusations of misconduct can be exposed and dealt with”. But does this work? The lawsuit argues that it is guileful to rely on whistleblowers, given that the Congolese populace is one of the most oppressed in the world:

“The DRC is one of the most repressive countries in the world, but, until they are forced to do better, Apple and the other companies are relying on largely illiterate, desperately poor, and exceedingly vulnerable people to figure out Apple’s complaint mechanism and report supply chain violations when they certainly cannot afford personal computers or iPhones and they do not have internet or cell phone access to connect to the outside world within the context of a violent regime that does not tolerate dissent and an unregulated industry that could retaliate with impunity against any whistleblowers.”

No matter how far the lawsuit reaches, it is beyond any reasonable doubt that tens of thousands of people – and likely more – are suffering deeply due to the global demand for mobile technology and batteries. Just being in contact with cobalt during long periods of time is carcinogenic and can damage the heart and lungs. So I want to be clear: if you work with building apps for phones, you are dependent on cobalt for these to work. For you to use bank services or pay for parking with an app you need a device that probably contains cobalt and maybe other conflict minerals from the DRC.

We all have a share in the responsibility. In our calls for digitisation we cannot ignore the history, supply chains, suffering and neglect that enable the constant streamlining of our lives.

While we wait for tech companies to increase their transparency and proactive efforts in exposing and dealing with the supply chains they rely on, and for both local and international regulations to provide better protections, you can begin considering some of your options:

Growth comes at a cost. But when you yourself are primarily benefiting, and people who suffer are made invisible, it’s easy to forget to stand up for those paying the highest price.