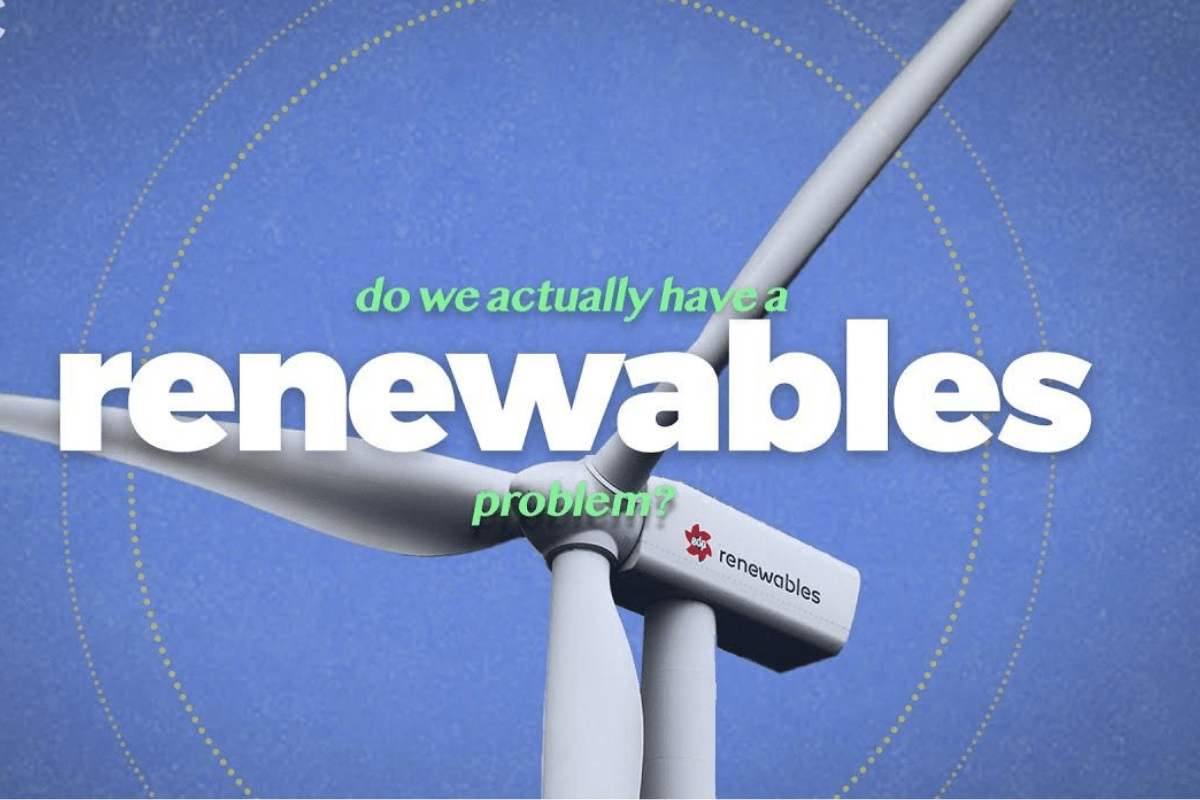 Tucked into a narrow valley straddling the border of Virginia and West Virginia lie two bodies of water: reservoirs carved from the earth of the Allegheny Mountains. One lies uphill of the other and a stream of water flows between the two. But if you look closely, that water seems to be defying gravity. Instead of running downhill, it’s going up it; the lower reservoir is feeding the upper one.

These two lakes and the water flowing between them might just be a solution to a zero-carbon world. This is a story about how renewables work, what they offer for a fossil fuel-free future, and how two bodies of water nestled in the Alleghany Valley of Virginia could make that future a reality.

On April 21st, 2020, documentary filmmaker Jeff Gibs released his movie Planet of Humans onto YouTube. The premise of the film was simple: renewable energy wasn’t working and wouldn’t save us from climate change. Throughout the film, Gibbs details the failings of the renewable industry and comes to a conclusion that teeters on the edge of a dangerous precipice: if renewables won’t save us, then population growth must be curtailed: “If we get ourselves under control, all things are possible.”

This vein of environmentalist thinking has historically been used to excuse eugenicist and violent population-control measures. But that is a topic for a whole different article.

Many of the points in Planet of Humans have been refuted or are just simply outdated, but Gibbs’ arguments epitomise a worrying trend of “renewable bashing” – a trend that rejects these young wind and solar industries wholesale, without offering feasible solutions to replace them.

That being said, renewables like solar and wind definitely do have problems, but these technologies are not hopeless like Gibbs seems to think.

So let’s briefly look at the obstacles renewables face in order to understand how best to navigate a path towards 100% clean energy by 2050. 👇

When it comes to wind turbines, a common takedown, especially among right-leaning politicians, is that they kill birds. Unfortunately, this is true. In North America, wind turbines kill between 140,000 to 500,000 birds a year – but if you zoom out to look at the whole picture, that number looks a little different.

Oh, and domestic cats kill roughly 10,000 times the amount of birds that turbines do. So, when contextualised, bird deaths caused by wind turbines are comparably small.

👉 The life-cycle impacts of both solar panels and wind turbines are yet another point of attack for those looking to discredit renewable.

These technologies require resources to assemble, install, and eventually dismantle, so some – including Jeff Gibbs – argue that renewables are not as clean as we think they are. But according to one 2017 paper that compared the emissions from the life-cycle of a variety of energy sources, solar and wind consistently produced some of the lowest impacts compared to coal or natural gas. This research reinforced an earlier, widely cited 2013 study that found similar results.

In short, despite the amount of concrete and raw materials required to construct wind and solar arrays, they can quickly pay off that initial carbon debt. And these technologies are comparably young, so as renewables continue to be honed, these installations will last longer and longer, making waste less of a problem.

👉 One of the largest problems facing renewables, however, is that they create too much energy. Or rather, they generate too much energy when we don’t need it. Wind and solar are variable in their outputs and produce energy when the sun shines the strongest or when the wind is blowing the hardest, which often doesn’t match up with the times we need it.

This mismatch means that when energy demand is low, but production is high, the grid must curtail or get rid of some of its excess energy supply or risk overtaxing the grid.

This curtailment is happening in real-time in California, which dramatically increased its solar capacity in the last decade, but has yet to build energy infrastructure to support it. As a result, the state had to curtail over 318,000 MWh worth of electricity production in April of this year, and as more solar and wind plants come online that number seems to only be growing.

In short, California shows us that to successfully scale-up renewables we must also have enough capacity to use the energy these technologies produce. Which brings us to storage.

Back in the Allegheny Mountains, water is still running uphill. Because, after all, this is a pumped-hydro storage plant – an age-old solution to a modern problem.

The Bath County pumped-hydro facility is one of the biggest batteries in the world, with the capacity to store 3,003 megawatts of energy. For comparison, the capacity of the largest lithium-ion battery storage facility in the US is currently 62.5 megawatts.

👉 The facility achieves this massive energy storage through a simple method. When there’s excess energy in the grid, instead of curtailing it, the facility uses the energy to pump water from the lower reservoir into the upper one, and then when there’s high electricity demand, they let the water run downhill through turbines into the lower basin like a conventional damn, fulfilling that demand.

A shockingly straightforward solution to the problem of energy storage. And if done right, it can stabilise the variability of renewables so that electricity is readily available whenever we need it.

There are some drawbacks, however: it requires a large amount of water for one, and it also requires mountainous terrain. But the concept of pumped hydro is being tinkered with to create alternative methods that don’t require open basins or mountains.

One proposal envisions a large cylindrical rock set in the earth that gets pushed up with excess water when energy production is high, and then, through the force of gravity, pushes that water back down through a turbine when electricity is needed.

But really, pumped-hydro storage is just one solution of many that needs to be expanded if we are to successfully achieve 100% renewable output by 2050. Interconnectors are yet another piece of a successful clean-energy puzzle.

👉 In simple terms, interconnectors combine separate grid systems, which allows states or even whole countries to trade-off excess energy. So, when storage is limited and demand is high, the local grid doesn’t need to curtail or waste electricity; it can instead transport that energy to a place where energy is needed or can be stored for later use.

These are the types of solutions we need if we are to quickly transform our electricity from fossil fuels to renewables: technologies that are already available, ready to deploy, and offer tangible solutions to the problems that renewables face.

The future of renewables will not be without hiccups, but according to the Stanford Solutions Project, a 100%-renewable energy system is feasible by 2050. So the biggest problem, then, is not some technological barrier but instead finding the political will to do the needed work. And the European Union is showing that initiative: they’ve begun to trailblaze a path towards net-zero carbon by 2050.

By 2030 they will reach an average of 33% of their energy sourced from renewables, with countries like Denmark, Finland, and Austria well ahead of that amount. And, crucially, the EU is expanding the interconnectedness of their grid, so when the sun is shining in the south of Spain, excess energy can be traded to Denmark when the wind isn’t blowing through their turbines.

But, at the end of the day, renewables can only get us so far. Recognising and transforming the way we in the West consume energy is also an essential part of mitigating climate change. If we continue with business as usual, we’ll need to transform a lot more.

So, if through policy and behaviour-change the amount of energy that countries in North America and Europe uses decreases, then the challenge of scaling renewables to meet energy demand will no longer be as daunting.